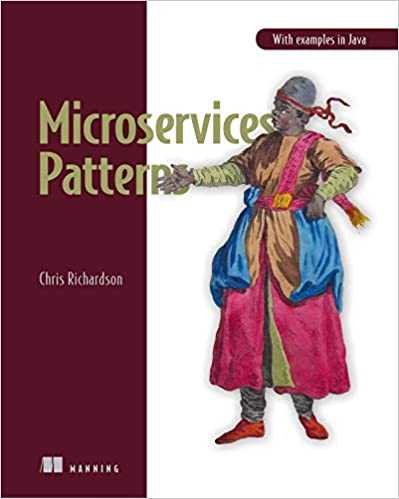 Microservice Patterns by Chris Richardson makes the case for why Microservice architectural style is a good fit for some contexts, and discusses some of the important techniques and patterns that can be used to implement and maintain it.

The Microservices architecture style is a response to a set of important problems and trends: increased demands of business for change, limitations of commercial off the shelf products, advances in cloud infrastructure, and proliferation of niche cloud and opensource technologies. Products now trend towards large, distributed systems, ever-evolving, and made up on many disparate components, technologies, and teams.

The bad guy: "Monolithic Hell" is the place organizations all-too-often find themselves. When an application follows the monolithic architecture pattern, but the organization and software system has grown beyond its ability to cope, they have arrived. Dependencies between teams and systems make change difficult and side-effects are unpredictable.

The good guy: Microservices architectural style encapsulates functionality into loosely coupled, independently deployable services. This allows the application to be evolved in a way that reduces dependencies between teams and systems. In addition, its increases the system's flexibility which benefits team's ability to judge and make trade-offs, improving the fitness for the organization and business context.

✅ Loosely Coupled: All interaction with a service happens via its API, which encapsulates its implementation details.

✅ Independently Deployable: A well-designed service is one which is capable of being developed by a small team with minimal lead time and with minimal collaboration with other teams. 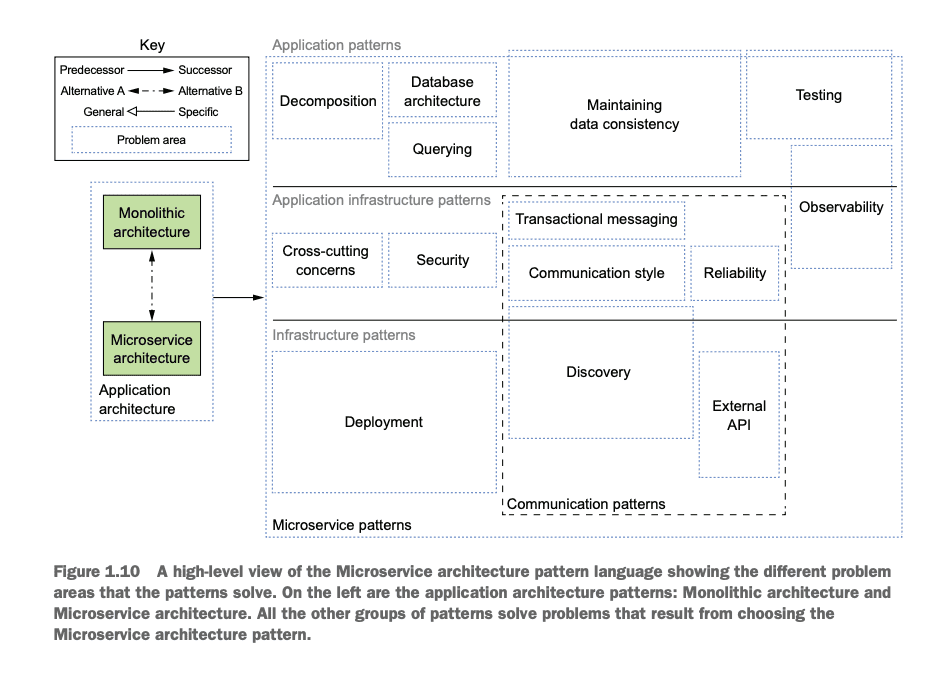 The book does a good job of balancing theory and practical detail. The author avoids rabbit-holes of interesting but uncommon edge cases, instead focusing on the areas that matter, and gives examples that architects and engineers encounter in the real-world. This book is a practical guide for experienced practitioners and new entrants alike.

Below are summaries of a few of the sections I found most value.

Decoupling services from one another opens up a variety of scaling strategies that can be summarized in the 3 Dimensions of Scaling: 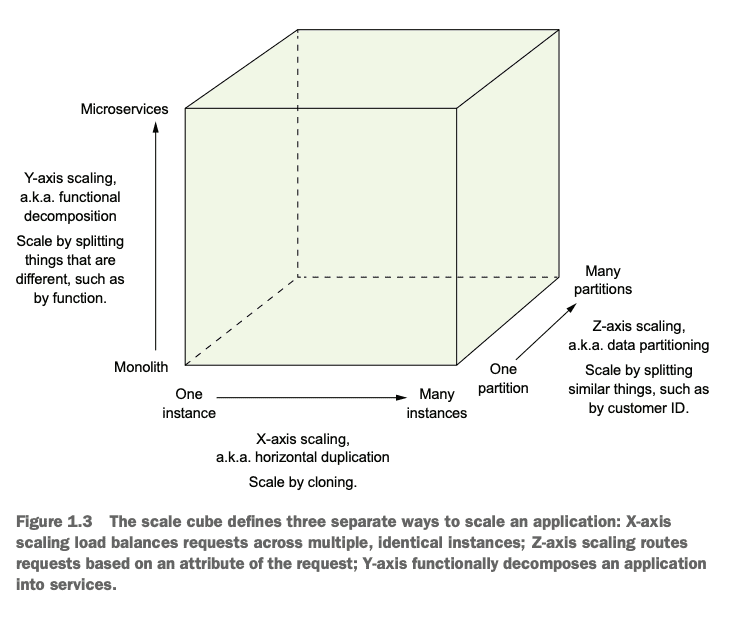 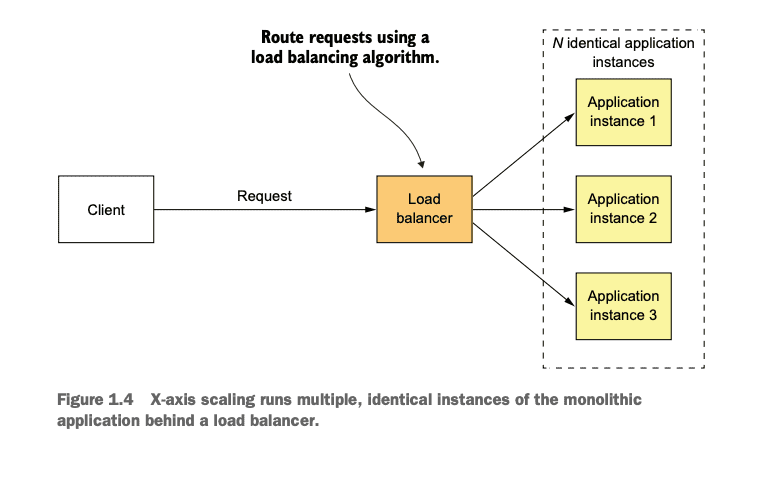 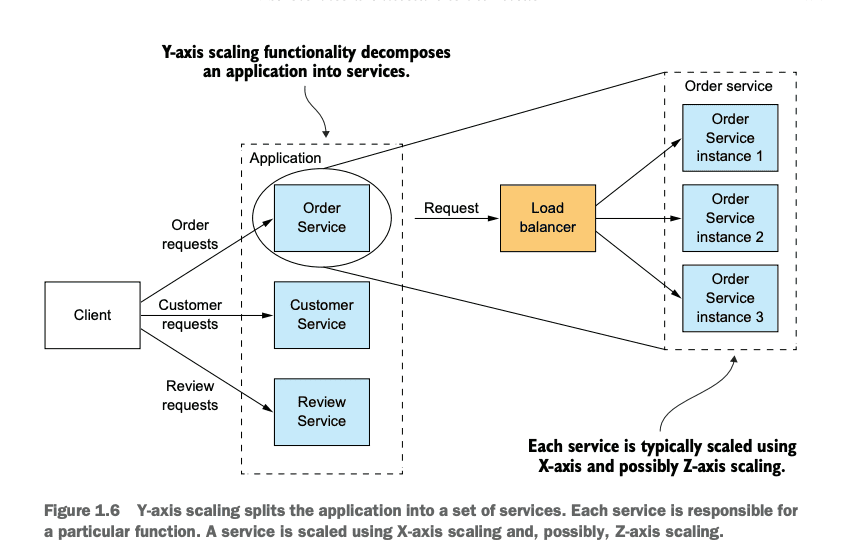 To develop a microservice architecture for your application, you need to identify the services and determine how they collaborate.

The author introduces Domain Driven Design early as a way of decomposing a system down to smaller parts. As discussed above, the problem with the traditional monolithic architecture is that it makes the unlikely assumption that the layered architecture will sufficiently explain the purpose of component parts relative to one another, and the relationships between them. This is implausible. It leads to bloat in various components, and fails to help architects and programmers to reason about components that may exist externally.

The Monolithic architectural style is in some ways a holistic Technology-First paradigm. Domain Driven Design replaces this with a Business-first architectural style. This addresses the nature of modern technology systems to change frequently. It also addresses problem that a technology-first view is necessarily exclusive - allowing only some of the people involved in building and maintaining the system to understand it.

In contrast, business problems remain relatively constant. In addition, DDD helps teams to define business problems more narrowly into domains and subdomains, enabling architects to align business and engineering into smaller systems. And if teams are focused on the business problems, they're more likely to build valuable software.

The author brings into focus the architectural benefits of encapsulating relevant business logic to its business domain. 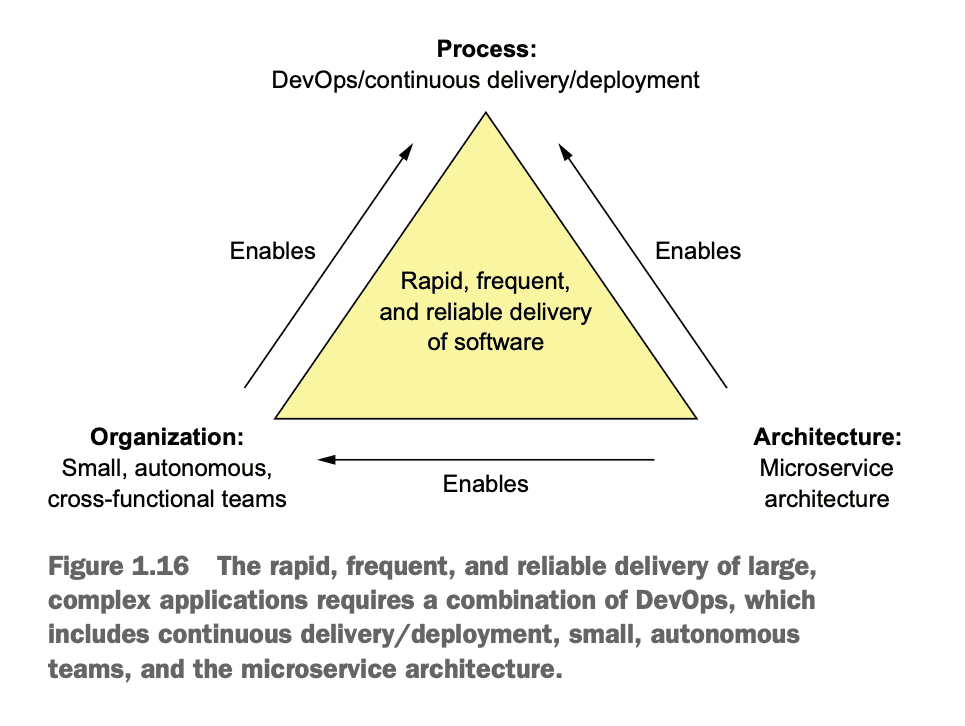 The author presents the Microservices architectural style as usually the best choice for large, complex applications because of this virtuous loop between architecture, organization, and process. This is in deference to the "Conway's Law", which predicts architectures will naturally evolve to reflect the organizations that create them. The "Reverse Conway's Maneuver" uses this tendency by devision an architecture that aligns to the business structure that exists, and the organizational structure that we want. Technology will naturally evolve to encapsulate dependencies within itself. Aligning organizational design to business domain naturally leads to a system that encapsulates its dependencies. That means faster and more predictable delivery. 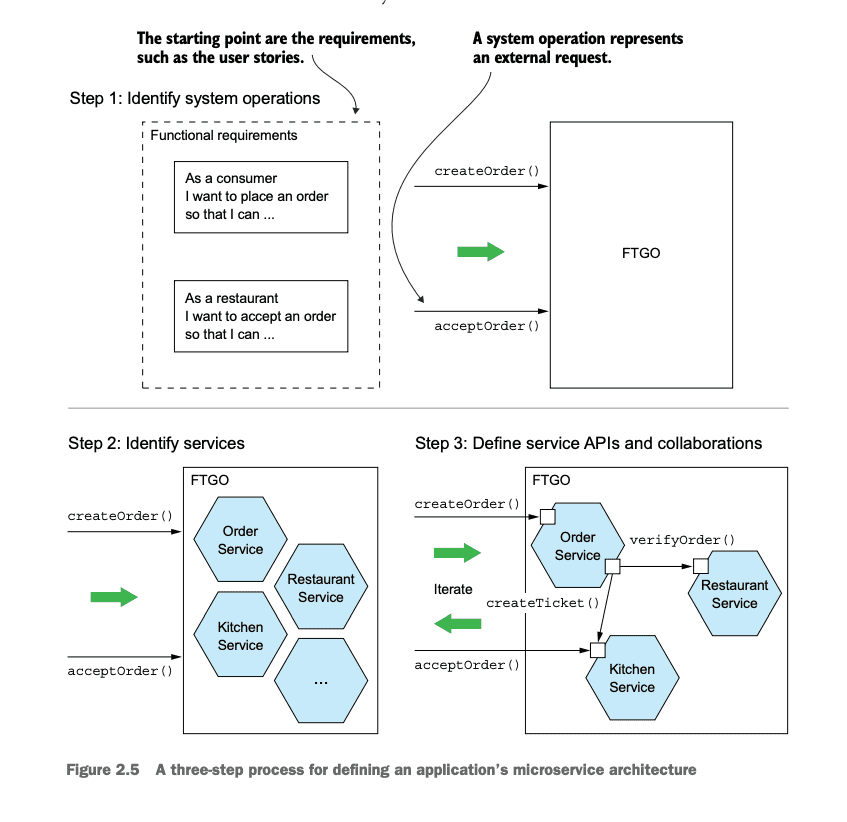 Identify System Operations starts with the process of establishing the high-level domain model.

Despite being a drastic simplification, a high-level domain model is useful at this stage because it defines the vocabulary for describing the behavior of the system operations. (p. 46) 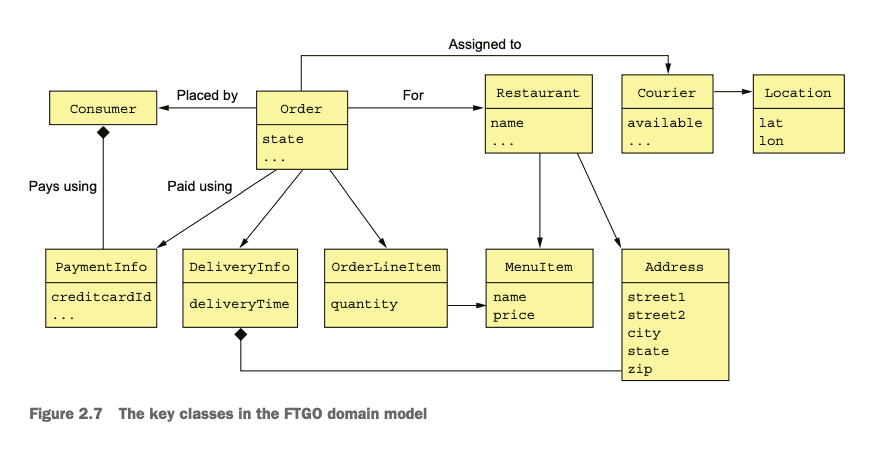 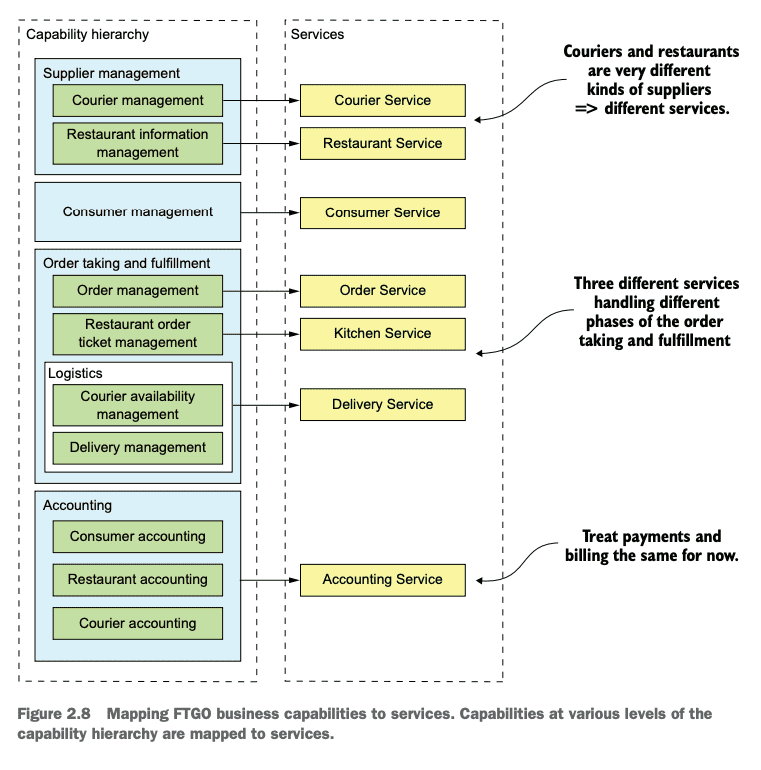 A key benefit of organizing services around capabilities is that because they’re stable, the resulting architecture will also be relatively stable. The individual components of the architecture may evolve as the how aspect of the business changes, but the architecture remains unchanged.

Identifying Services by Subdomain with DDD

At the level of the enterprise, DDD takes a much different approach than the Business Capabilities Model. It allows for variation within the business to redefine a given entity in its own terms.

DDD calls the scope of a domain model a bounded context.

Two principles from OOD that are especially applicable to defining a Microservice architecture.

Obstacles to Decomposing an Application into Services

(This section I found extremely helpful and concise so this is mostly excerpts from p. 57-59)

Communication patterns are organized into 5 groups: 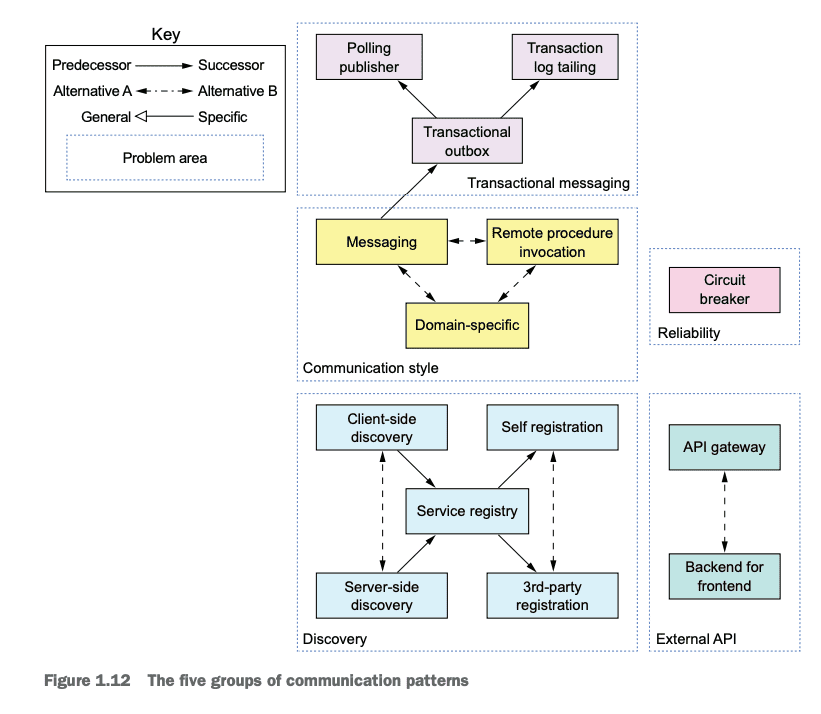 Each group is covered in depth in the book. Particularly helpful is the authors discussion of API patterns in Chapter 8.

The Microservice architecture can introduce a challenge where clients are required to make many requests over the internet which is slow and can add a lot of complexity to the client code. 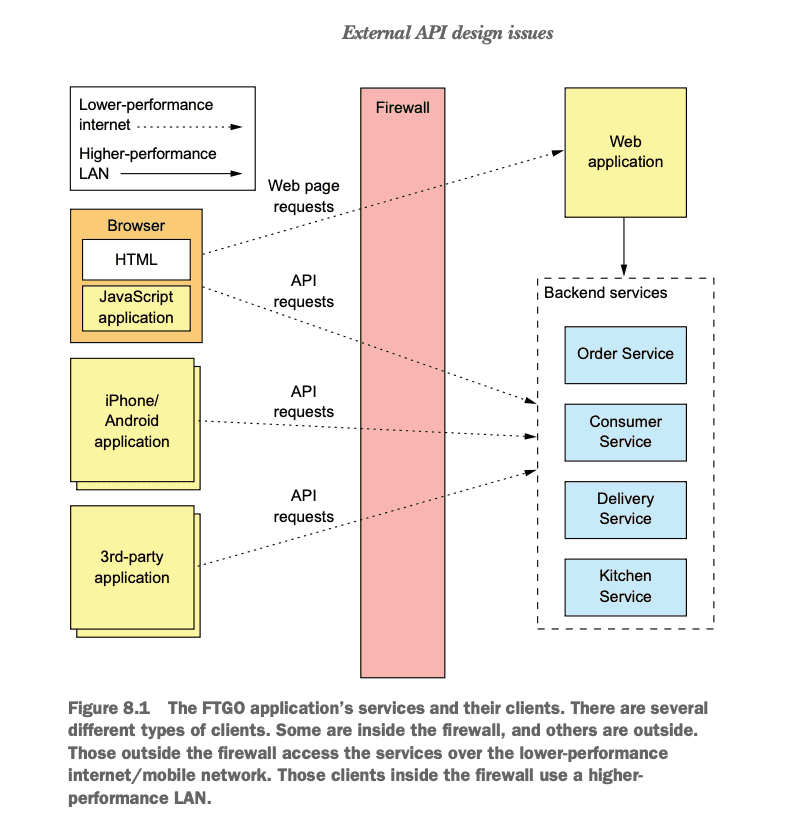 The latency introduced by making requests over the internet can result in a poor end user experience. The lack of encapsulation of the backend services introduces complexity into the client and a tighter coupling. Frontend developers may often be required to change their code in lockstep with the backend.

In addition, it risks the idiosyncrasies of the service communication mechanisms to be absorbed by the clients such as client-unfriendly IPC such as gRPC and AMQP. Ideally, communication over the internet should be limited to client friendly IPC like REST.

An API gateway is a service that’s the entry point into the application from the outside world. It’s responsible for request routing, API composition, and other functions, such as authentication. (p. 259)

The API Gateway pattern enables encapsulation of backend service complexity. In these cases an API gateway performs API composition, allowing clients to efficiently retrieve data using a single API request which fans out to other services over the low-latency network. Implemented properly, this helps prevent tight coupling between the client and services. 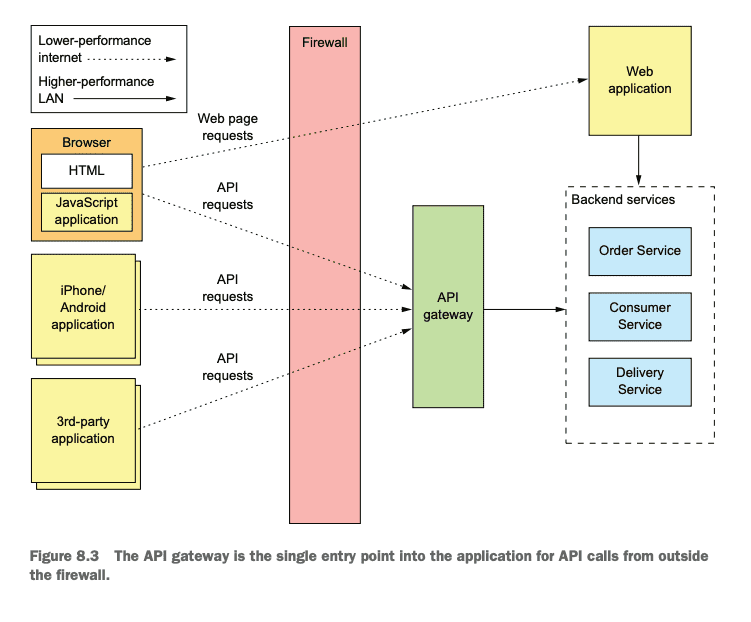 In addition, the API gateway is often responsible for protocol translation. It may provide a RESTful endpoint for external consumers even though it communicates with services that use a variety of protocols, REST, gRPC, and AMQP.

There are tradeoffs when introducing this pattern including adding a potential single point of failure. This risk can be mitigated by leveraging a high-availability, high-reliability API gateway such as AWS API Gateway.

In addition the API Gateway can be a way to improve service to service communication on the backend. However, this can sometimes lead to the "Distributed Monolith" anti-pattern. Watch for chattyness between services as a sign of tight coupling and improperly established service boundaries. This adds latency, complexity, and network bandwidth congestion.

API Gateway can be an opportunity to locate general functions close to the client. Common Edge Functions include:

Alternatively, these Edge Functions can be leveraged as standalone services. The benefit is that is of a separation of concerns :the API Gateway responsible primarily for routing and translation while a separate Edge Function could "Gateway agnostic", developed, maintained, and deployed independently. The drawback of this practice is that it increases network latency because of the extra hop, and adds complexity.

One issue the author raises is the question of ownership. A common anti-pattern is that the API Gateway becomes a bottleneck to fast flow. In these cases, usually a client team would be dependent on a team owning the API Gateway. This added queue meant that the speed of change would be highly dependent upon this central team.

The Backends for Frontends (BFF) model introduces a two sided API Gateway. One side responsible for internal communication and Edge Functions, the other side owned by the Client team which could customize its own stand-alone API gateway, specific to its client requirements. 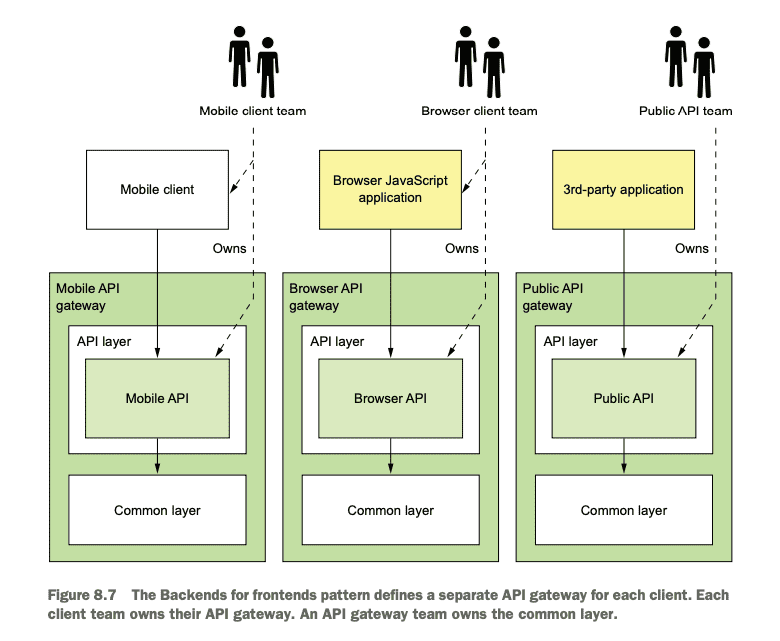 Designing and implementing an API gateway

Performance and scalability leads to a number of tradeoffs including synchronicity, blocking I/O, and "callback hell".

Reactive Programming abstractions become a key feature of the API Gateway Pattern. As mentioned earlier, API composition consists of invoking multiple backend services. Some backend service requests may depend entirely on the client request’s parameters. Others might depend on the results of other service requests. In these cases writing API composition code using the traditional asynchronous callback approach quickly leads you to callback hell. "A much better approach is to write API composition code in a declarative style using a reactive approach." (p. 270)

The AWS API Gateway fulfills some of the requirements for an API gateway including auto-scaling, but it doesn’t support API composition, so you’d need to implement API composition in the backend services. 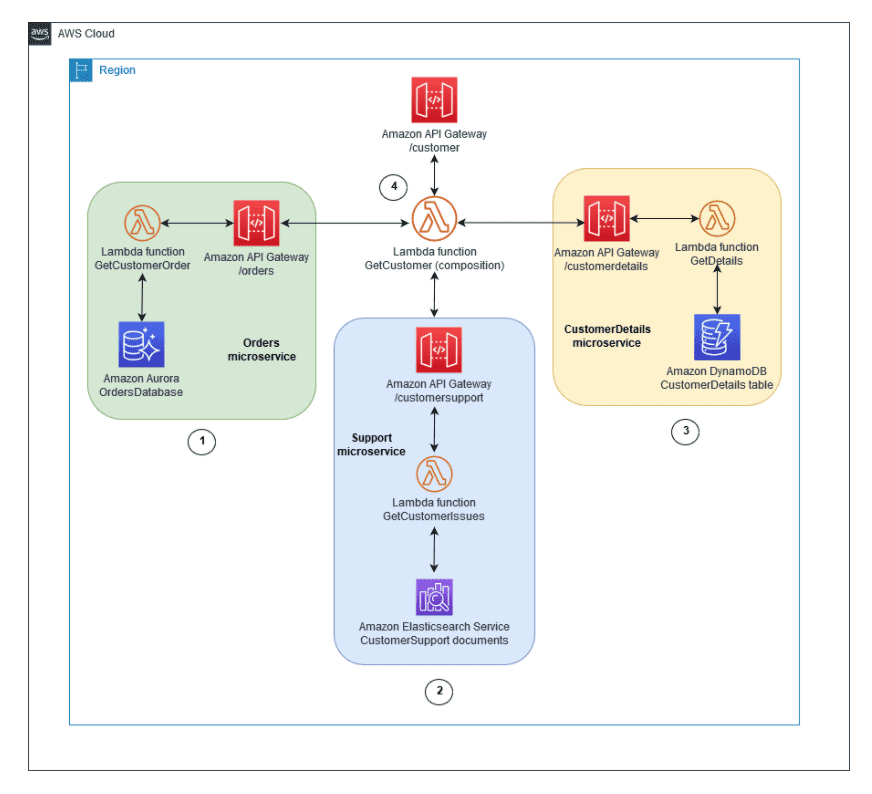 The AWS API gateway also only supports HTTP(S) with a heavy emphasis on JSON. It only supports the server-side discovery pattern. [...] Despite these limitations, the AWS API Gateway is a good option in many cases. (p. 271)

Spring Cloud Gateway provides a simple yet comprehensive way to do the following: 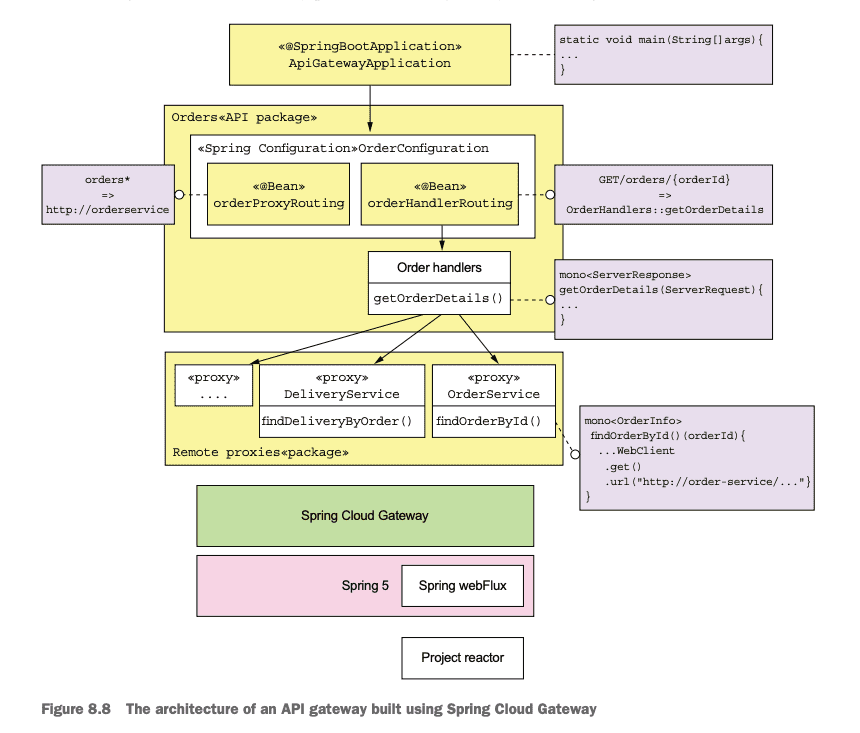 Different clients need different data. One of the benefits of GraphQL is its ability for data discovery and to write custom queries to retrieve data. It is especially intuitive for developers and enables Client teams to discover and retrieve data extremely quickly and with maximum flexibility, abstracting away all the backend complexity. 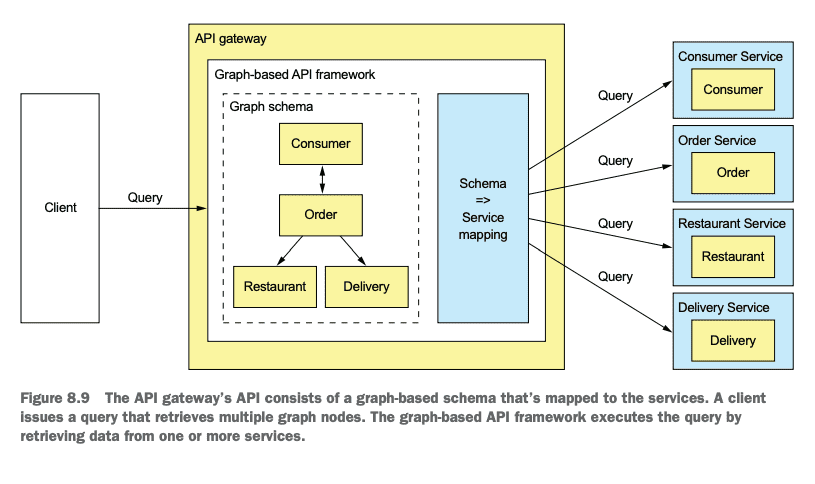 GraphQL, that’s designed to support efficient data fetching. The key idea with graph-based API frameworks is that, as figure 8.9 shows, the server’s API consists of a graph-based schema. The graph-based schema defines a set of nodes (types), which have properties (fields) and relationships with other nodes. The client retrieves data by executing a query that specifies the required data in terms of the graph’s nodes and their properties and relationships.

The author offers an example of an API Gateway developed for the FTGO app discussed throughout the book. 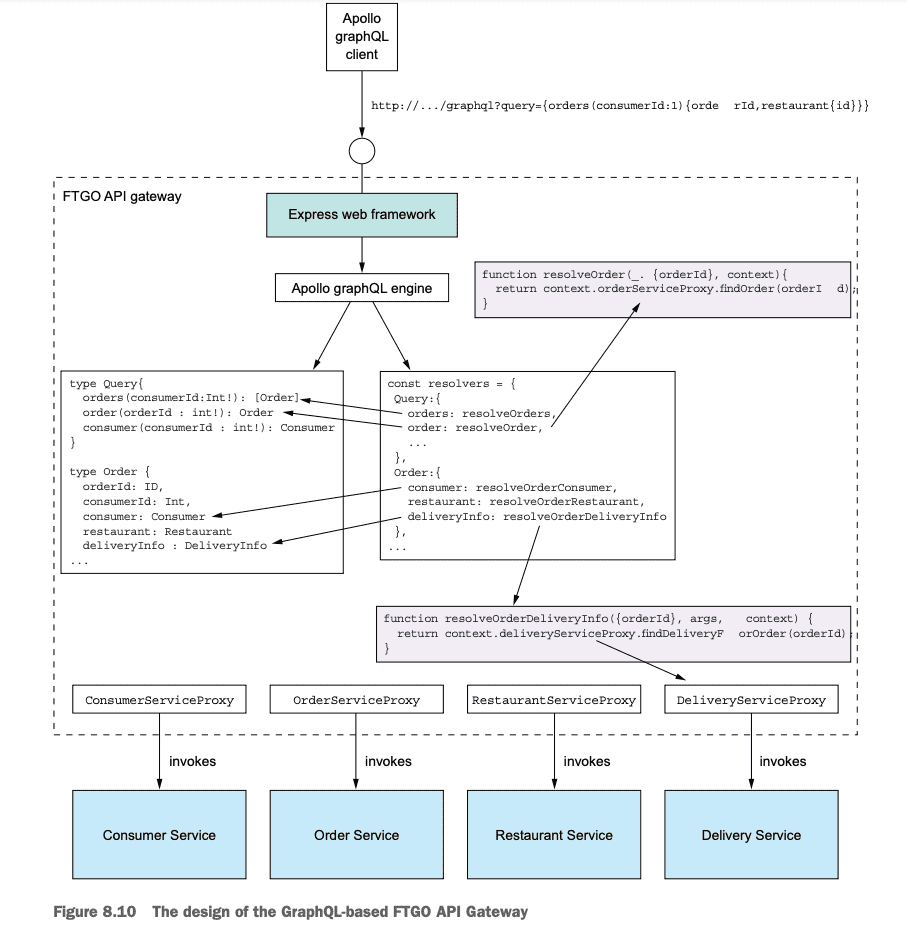