What is the book’s argument?

In The Startup Way, Eric Ries creates an enterprise focused successor to The Lean Startup, to argue that innovation is a management discipline that can be developed within Large Established Organizations. 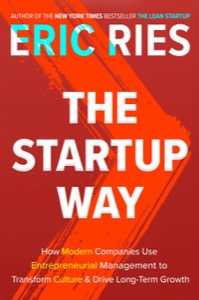 The Startup Way has three parts (1) The Modern Company, (2) The Roadmap for Transformation, and (3) The Big Picture.

Does the book do what it says it is going to do?

The argument starts by painting the picture of the modern enterprise: one one hand they have existing businesses in stable mature markets. On the other, they have a need for new sources of growth that can only come from innovation. The problem, he says, is that most large enterprises manage these two ends of the business portfolio the same.

Eric Ries notes the remarkable idea that so many entrepreneurs begin their startup journey to escape the corporate environment that seems to stifle innovation. Ironically these same entrepreneurs seem to routinely create this stifling culture when their organizations grow up.

His analysis is that as an organization grows up it emerges from extreme uncertainty into something approaching maturity and stability. Product Market fit. Crossing the chasm. Especially when reaching into the later stages of market adoption, much of the initial big picture is baked in and managers need to turn their focus increasingly towards operations.

The tools of traditional management work well the more mature the technology, product, and market. Stability of these systems make traditional management tools (like quarterly and annual forecasts) more reliable, thus it makes sense for them to be central for in planning, resource allocation, and performance evaluation.

Eric Ries says that these traditional management disciplines are precisely the wrong prescription for innovation because it is informed by and promotes a stability and repeatability. From a cultural lens this means the system’s disposition is to reduce variability (because it introduces waste) and reduced risk (because it assumes predictability). He sums this up by juxtaposing two quotes, “Failure is not an option”, and “I eat failure for breakfast”.

Standardization, mass production, lean manufacturing, and Six Sigma are all fruits of this hard-won conceptual victory. Baked into these methods is a presupposition that failure can be prevented through diligent preparation, planning, and execution. But the startup part of the management portfolio challenges this assumption.

The Startup Way is an evolution of the Lean Startup, helping formalize a set of entrepreneurial management practices for the enterprise. As mentioned above, a significant aspect of operating under uncertainty is a mindset that embraces learning, accepts risk, and adapts to market indicators. The Startup Way is subtitled “How Modern Companies Use Entrepreneurial Management to Transform Culture and Drive Long-Term Growth”. So the explicit objective of Entrepreneurial Management is an intermediary means to driving culture change. 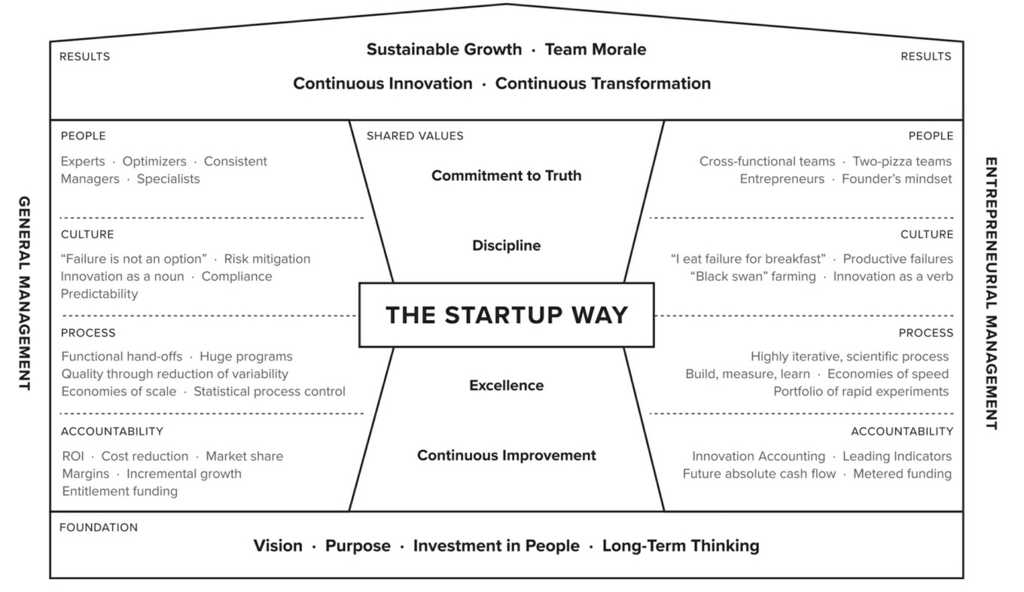 Internal startups must blend the scientific rigor of R&D, the customer-centered focus of sales and marketing, and the process discipline of engineering. Is it any wonder they don’t have a logical home in the traditional org chart?

Is the book a contribution to the field or discipline?

The first part on the Modern Company brought together a number of concepts that are important for understanding - plus a proposed solution for overcoming - the common barriers to innovation in large established organizations. Each has been articulated in much greater detail elsewhere but bringing them together is I think an important contribution. Taken together these concepts help illustrate a difference between the discipline of Entrepreneurial Management at the enterprise level, and innovation at the startup level.

Here Eric Ries sprinkles in some key aspects from Lean Startup, in particular his methods for making learning a concrete objective. Early stages of metered funding relies on are metrics that are not always straight-forward, but we need them to be concrete and understandable by everyone including the stakeholders that will sign off on following round of funding.

A few examples to highlight include Leap of Faith Assumptions (LOFAs) that your product in its current form rests on. In particular, he highlights the Value Hypothesis (tests whether the new product or service creates value for the customer) and the Growth Hypothesis (tests how new customers will adopt the product or process). He also offers a very handy MVP Scoring Chart that is effective at developing and framing optionality.

Lastly, bringing in the cultural change aspect is important, and Eric Ries does a good job at explaining how the role of the leader might be different in entrepreneurial settings than traditional management settings. In the entrepreneurial setting, things move too quickly and there are too many skillsets involved for the leader to direct activity. Instead of directing action, the leader’s role is to develop a regular cadence of reflection. Its all about learning, and he sums it up well in the two questions he instructs leaders and coaches to ask teams: